A Happy and Holy Death

This week saw the death of a much beloved nana. She lived to 93 and witnessed the marriage of many of her grandchildren. She was blessed with Hannah's heart when she gave up her only son to become a full-time lay missionary. Nana continued to live with him surrounded by his missionary community, in the same house where she raised her 8 children till she breathed her last, peacefully in her sleep.

She lived a full life in the midst of her loved ones and close to her Lord and saviour.

It was a good death indeed...

I believe that a good peaceful death is a gift from God. One that we must ardently pray for irrespective of one's age. Some of us may be elevated to die as martyrs but for those of us who are elected to not to, a peaceful death must be our aim. A good death is also the fruit of a long and perilous journey, it requires life-long preparation... like a successful marriage.

Here is an excerpt from a beautiful article on MercatorNet which describes a death that I would love to have ...


...the phone rang. It was from my niece in Ireland, to tell me that my older brother, Johnny, who had been taken into hospital a few days earlier with what they thought was a problematic lung infection, was not responding to treatment; he was now in a very critical condition. I instantly dropped what I was doing and caught the next plane to Cork. I arrived late the same night. Early the next morning, All Souls Day, I went to the Bon Secours hospital where he was lying in the intensive care unit. There was my dear brother, only a year older than me, who had stayed with me only a fortnight before and with whom I shared so many memories of the past, now lying helpless and struggling to breathe, with an oxygen helmet on his head and surrounded by bleeping and flashing machines.

But he was also entirely conscious and completely at peace. The first thing he said to me (he had been an army officer for thirty years and had always described himself as a “bluff soldier”) was, “I think courage and dignity are required right now”, with a wry smile. The second was, “Do you remember Churchill’s last words?” I quoted them. We had both shared a great interest in Churchill’s life and I was always looking out for memorabilia relating to him to give to Johnny. I reminded him now that my best find had been a 1940s biscuit tin at our local waste disposal dump, decorated with the key quotes from Churchill’s wartime speeches.

The third thing he said was, “A friar in sockless sandals came round earlier and, to use an old-fashioned word, he has shriven me.” He then told me the hymns he wanted at his funeral, the simple inscription for his grave – no mention of honours or army rank – and the words for a memorial card. They were from St Thomas More, and Johnny recalled his own father, to whom he had been very close, telling them to him: “Do thou pray for me and I will pray for thee, that we may meet merrily in heaven.” The word “merrily” particularly mattered to him. He always had a great, if sometimes mordant, sense of humour, and heaven had to be a merry place. When someone placed a blanket over his feet so they wouldn’t be cold, he said with a characteristic smile, “Don’t worry, they will be the first to burn”.

These little conversations and remarks went on for most of the day. Johnny’s children never left his side. My brother and sister joined us. A palliative care doctor came by and gently indicated that his lung capacity was decreasing and that his oxygen levels were dropping. A nurse quietly and sensitively monitored the situation, explaining to us that they would only give him morphine when his breathing had clearly become very distressed. A young lay pastor came and prayed a decade of the Rosary with us. A huge plate of sandwiches materialised from nowhere in the relatives’ waiting room. The sockless friar (a Capuchin) came back with Communion, the nurse opened a small aperture in Johnny’s “helmet” and he received a fragment of the Host with great reverence and recollection. He called for a sip of cordial and managed to suck a tiny amount with a straw. He also had a spoonful of ice cream. He made it clear that he didn’t need any more food.

At four in the afternoon he was asked if he would like some morphine to ease his, by now, very laboured breathing. He said “Yes” quite firmly. The doctor explained that the oxygen helmet was no longer of any use and it was gently removed. The machines were then unplugged and Johnny was made comfortable. He fell asleep. We all stayed with him, talked to him, sang to him, held his hands and stroked his head until, an hour later, he drew his last breath. My younger brother turned to me and said in a voice of awe, “What a mystery death is!” I thought of a favourite remark of Johnny’s, which he had repeated to me only a couple of hours before: “There are no pockets in a shroud.”The Capuchin returned and reminded us that All Souls Day was a wonderful day to die on. The palliative care nurse wept along with us all. I remembered that Johnny had chosen St Joseph, patron of a happy death, as his Confirmation saint and had always had a special love for him. In fact he had named a succession of his boyhood tortoises “Joseph” in the saint’s honour. In his last hours St Joseph had not deserted him.

I have described Johnny’s dying in this detail – and what a privilege it was to have witnessed such a death, his last loving legacy to his family – to show the kind of experience we would all wish for: sensitive and attentive care, spiritual and medical, by all the staff and the vital opportunity for Johnny to make his own inimitable farewells. It is a memory that his children and the rest of us will carry until our own dying day...Johnny died, as he said, in the country he loved and surrounded by the people he loved; “My faith, my family and my friends are what matter to me” he told us in his soldierly fashion. In the intensive care unit of the Bon Secours hospital, with its Catholic ethos and atmosphere – a crucifix on the wall and a statue of Our Lady in the corridor – patients are treated as children of God: “Johnny is in God’s hands” the nurse said as she monitored him. It makes all the difference – in life and in death.

And Johnny’s own last words, before he slipped into unconsciousness?

To die a holy death, at peace with one's neighbour and God  is a blessing indeed. 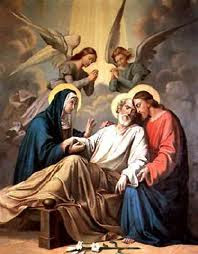 O to die in the arms of Mary and Jesus...

"To the pure, all things are pure, but to those who are corrupted and do not believe, nothing is pure. In fact, both their minds and consciences are corrupted." - Titus 1:15

I found this true, time and again; especially when exposed to secular media, films and music. Numerous were the times I heard the Lord sing and coo to me through the din. Numerous too, were the times my mind was dulled from perceiving the evil therein.

I like to believe that I am protected and my Father sings songs of gladness over me. 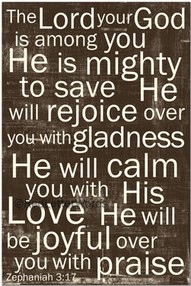 Some of the most beautiful lessons I learnt were from sources far, far from religious or spiritual.

The most distant memory that comes to me (considering that my memory is like a sieve) is of my watching the undeniably morbid movie, The English Patient. Lust, adultery, fornication and lies abound in that love-in-the-time-of-WWII film. But this is what I remember most- the scene where the lady-much-desired and her (cuckold) husband were flying their two-seater propeller jet to their dug-out site in the North African wasteland, where the lady's lover was waiting to be picked up. The affair was broken off by then and the husband knew that he was cheated upon, though he did not reveal it to his wife or the friend/lover. As the plane descended, the husband's feral rage took over and he tried to drive the jet into the lover, hoping to kill all of them together. Instead, the husband dies instantly, the wife gets mortally wounded and perishes in the desert and the lover dies much later, a victim of euthanasia, broken-hearted, burnt beyond recognition and a traitor. The film treated the entire story very romantically... but all I heard, was a still soft voice saying- The wages of sin is death.

God did not need to meet out their punishment. Their own flawed decision set into motion the wheels of fate which they could not stop and led to their untimely destruction, and that of others as well. I felt sorry for them... I really did; but it brought home to me the truth that death was not just metaphorical; it was real and concrete.

Then there was Avatar. Who can forget the memorable Na'vi greeting- 'I see you.', which is to see into another, to truly look into their souls. How poignantly it reminded me of Psalm 139 ...

Then there is the other side of the spectrum. When evil warps the imagination, nothing then can remains innocent. Before predators became, there was the thought, the fantasy that foreshadowed it. There are those who after encountering the Light, now practice extreme abstinence, not out penance but out the desire for protection. It doesn't  take much to awake the old demons...

The Lord often does deliver them but sometimes he desires to strengthen their will by asking of strong measures.

St. Augustine knew of it. St Paul remarked of it when he spoke of the thorn in his flesh .

But take heart, in the end, Grace and one's love of Jesus will see one through...
Posted by Unknown at 11:09 PM 1 comment: