May is nearly here- the Month of Mary.

Mary was a natural contemplation mystic. Contemplation being a form of prayer where a person turn things over, not in his or her mind but in her heart. Heart being the seat where one finds God, not quite the fluffy, pansy, emotional-driven core but a place of truth and trust. Feelings do have a play but more than that it's a place of surrender and abandonment to God. 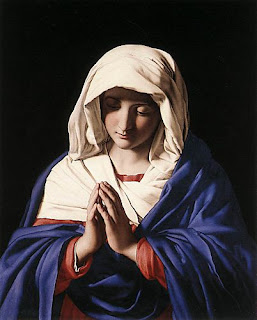 'Do unto me as thou hast said'


Those are not easy words if one truly understood the full implication of saying them. Mary weighed the words in her heart and spoke- Fiat. A complete consummation of consent. And the history of mankind changed forever.

This May, I thought of doing Mary's Way. To contemplate and to sit abide in God. The fruit of contemplation, is surrender. But before that happens, there is something else... belief.

I often wondered what the difference was between faith and trust and belief. This is what I understood-

Faith is a gift. To become aware of God and trust in who he is.
Trust is confidence in the credibility of God.
Belief. I think Belief becomes more personal and intimate. Belief is a 'knowing'. It is faith in action.

Paul received the gift of Faith at Damascus. Mary (the sister of Martha) trusted Jesus to have done something to save Lazarus.

But Mary believed... she knew. Old Simeon knew he held the Messiah in his arms. He didn't need a white dove hovering over. Abraham believed God. To believe is to translate faith into action.

One of the most beautiful proofs I have read on belief is from 'The Children of Hurin' by J.R.R.Tolkien. The story is one of tragedy surrounding the family of Hurin who challenged the might of Melkor. Melkor was a fallen Elect, an immortal. Not of flesh and blood but of pure spirit. He seek to subdue all the earth and creation but the elves and men of Middle-Earth challenged him. They failed and Hurin, the leader of men was captured.

Thus begins a dissertation between Melkor the immortal and Hurin the man. Melkor tries to destroy every belief that Hurin has held sacred since his youth.

To break a man's beliefs is to subjugate him completely.

Man needs to believe, in order to live.

But in the end, Hurin pronounces his one true creed- I know this and I know it with all my heart, that you are not the Lord of men and you shall never be its master.

God is Just.
God is True.
God is Love.
God is Good.

And the scripture resounds- 'Blessed is she who believed...'
Posted by Unknown at 10:10 AM 2 comments: